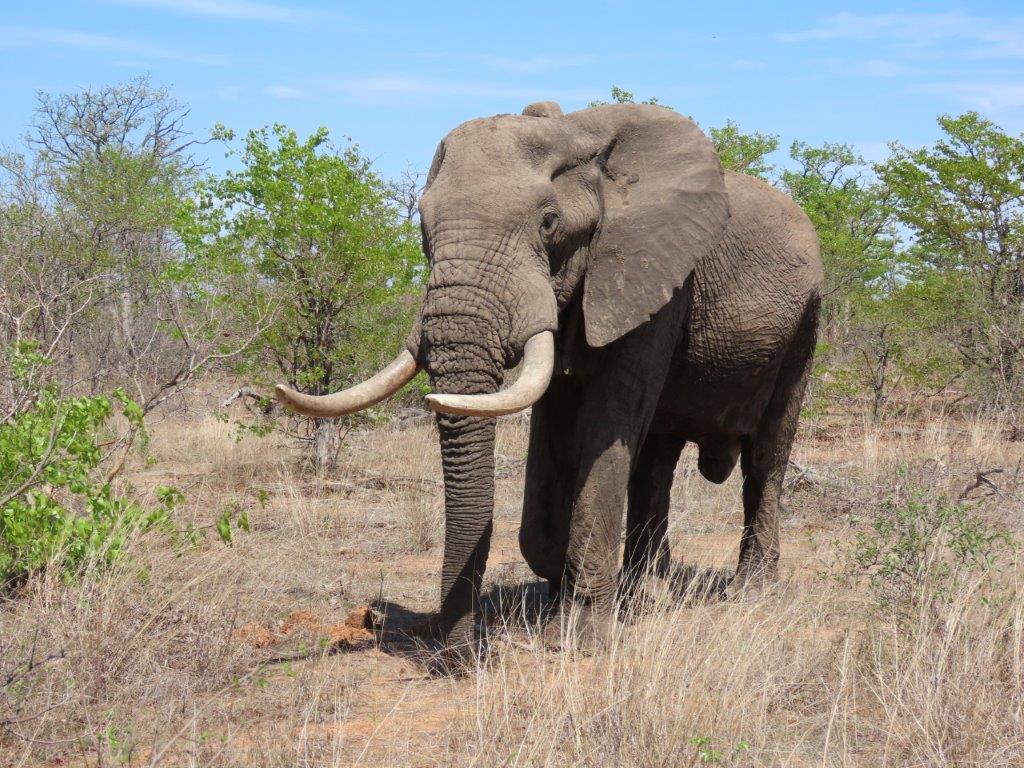 Most people who are part of the Associated Private Nature Reserves (APNR) have come to know Matambu. He is a true gentle giant in every sense of the word. Sometimes he bestows a great honor on us by contact rumbling when he senses us. Possibly, we have visited him frequently enough since first sighting him on 16 June 2005 or due to his almost complete blindness he has come to recognize the sound of our research vehicle and the scent of its passengers. During the annual aerial census, Matambu was seen walking closely on the heels of a younger bull in order for him to swiftly weave his way through the bush. We had often found him in the company of Whispers who protectively charged at us when we immobilized his companion for whatever
reason, uncertain if we were meaning him harm.

In May of this year, we thought we were going to lose Matambu after a severe infection near the base of his tail and his underparts, probably after being attacked by another bull. We turned to Wildlifevets (Drs. Ben Muller and Joel Alves) to treat his wounds three times. A deep sadness hung over Elephants Alive when we were told during the last treatment that we needed to let him pass on. As we mentally prepared ourselves, Matambu had other plans and a clear will to live as permit delays were long enough for him to slowly show improvement. Almost six months after his injury, he is still thin and has a less severe infection but the flushing green grass will hopefully give him the kick-start he needs to boost his immune system and fight off the infection. We are delighted to be approaching the festive season and the New Year with this special elephant. Keep fighting Matambu, as we need your continued existence to bring us added joy!

In 2009 Rhandzekile, meaning ‘Loved’ in
Shangaan, was first sighted on Ntsiri in the Umbabat Private Nature Reserve as
a young sub adult cow. Through the years, people who sight her have been
shocked at how she has kept going. She has on occasion popped up in the APNR
and now 10 years later she has a calf at foot and is clearly lactating. The
hole in her forehead recently looked as if it was oozing puss so we again
called Wildlifevets to the rescue. They suspected that the handicap was
congenital. Miraculously, she does only 2 % of her breathing through her trunk while
the rest is audibly done through the hole in her forehead. After her
examination and some booster injections, she moved out of Balule Private Nature
Reserve all the way down to Skukuza in a month, clearly showing us that her
handicap does not hold her back in anyway.

Rhandzekile has the company of her family and
as Matambu has his younger guardians that come and go, we are left to wonder
who in Rhandzekile’s family will be helping her to drink by placing their
water-filled trunks in her mouth? So it is in the life of elephants. They care for
each other and sometimes you are privileged enough to get a glimpse into their
world where strong friendships give them a will to live.

Thank you to all the landowners of the APNR for reporting sightings of this cow. We would like to monitor her more closely and fit a collar so your sightings are valuable. Thank you to the Wardens and especially Ian Nowak or helping with the location of this cow for examination