As a potential Kruger National Park (KNP) tourist, you may self-drive into an elephant sighting. Depending on your view and the type of sighting, they may keep your attention for an hour. If it is only a group of young bulls and not a family unit with all the intricacies of family life and the delightful elephant babies to observe, you would probably leave the sighting sooner. You may have noticed a collar on one on or two of the bulls, especially in the southern region of the Kruger. As you watch them peacefully feed and rhythmically flapping their ears, you would never have guessed where these bulls have been. You would never know what incredible institutional knowledge is locked within their brains and the paths that these collared elephants are courageously forging.

Since 2018, with the help of Administração Nacional das Áreas de Conservação (ANAC), the Mozambique Wildlife Alliance (MWA), Saving the Survivors and our donors, we collared a number of elephants outside of the protected areas in southern Mozambique. The collaring operations were conducted by our dedicated colleagues Drs. Carlos Lopes Pereira, Joao Almeida, Hugo Pereira and Hagnesio Chiponde and have revealed some extraordinary journeys. While the corridor-moving elephants of Mozambique have been mapping the connectivity of a larger landscape with their tracks, on the other side of the globe, 15 Asian elephants have wandered 500km from Xishuangbanna, a nature reserve in China’s southwestern province of Yunnan, north toward an unknown destination. There the local government has deployed 14 drones and some 500 people to keep the herd safe. Eight people act as constant bodyguards tracking them 24 hours a day and ensuring that they are lead away from densely populated areas by providing over two tonnes of elephant food where needed. The State TV has been following their every move with the hashtag #WhyElephantsTrekkingNorth viewed more than 16 million times on Weibo. Drone footage of them sleeping has attracted 200 million views per day. 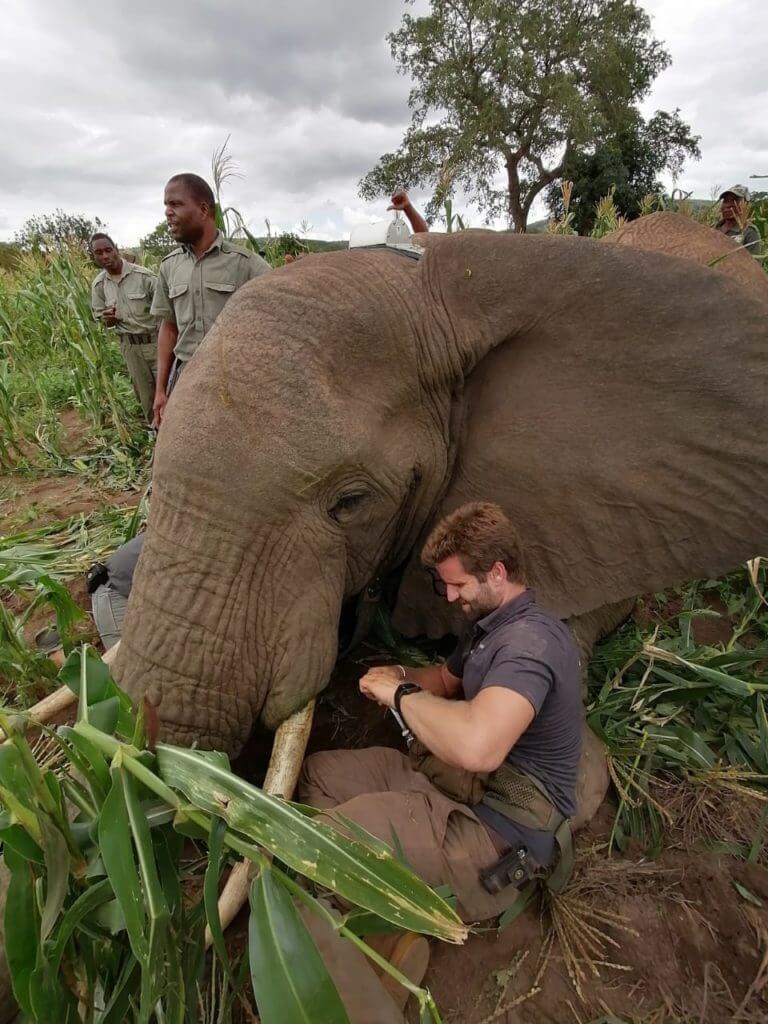 Dr Joao Almeida and Administração Nacional das Áreas de Conservação (ANAC) collaring a bull named Swazi who has been caught red-handed crop-raiding. Swazi get his name from the little detour he makes along the route into Eswatini (Swaziland) (photo: Saving the Survivors) 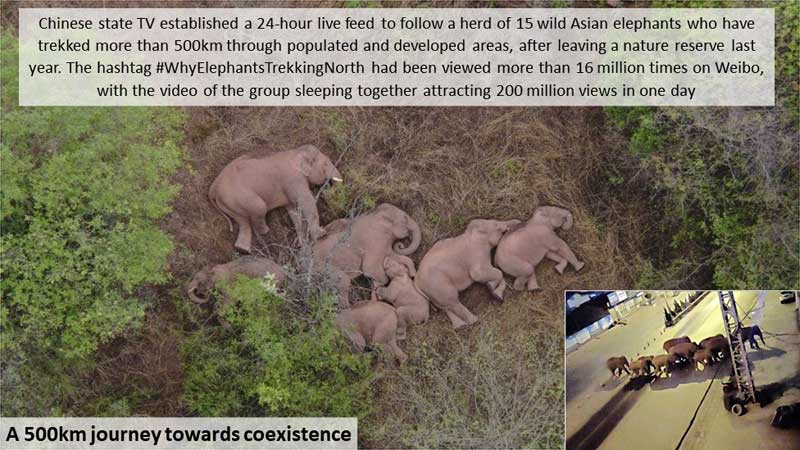 Part of the famous herd of elephants. They are exhausted after travelling over 500km north from Xishuangbanna, a reserve in China. The elephants have crossed human infrastructure and helped themselves to crops and water sources along the way (photo: China Central Television.)

Our bachelor herd of over 10 trailblazing elephants have trekked without the fanfare nearly 200km across the unfenced landscape of southern Mozambique after first resting in the Kruger National Park over high summer.

Like their Asian counterparts, they have crossed busy roads, densely human dominated areas, commercial farmlands, mines and subsistence croplands, mostly under the cover of darkness and at high speeds.

In 2020, they came some 8km short of reaching the Futi corridor before being chased back by gunfire, as they have not left subsistence crops and dams untouched in their wake. This year they are on the same route again and we hope that they will be able to join with the unique coastal elephant population of Maputo Special Reserve (MSR). Last year’s journey saw the tracks of the MSR family units that we had collared in 2019 overlap with those of the bulls. 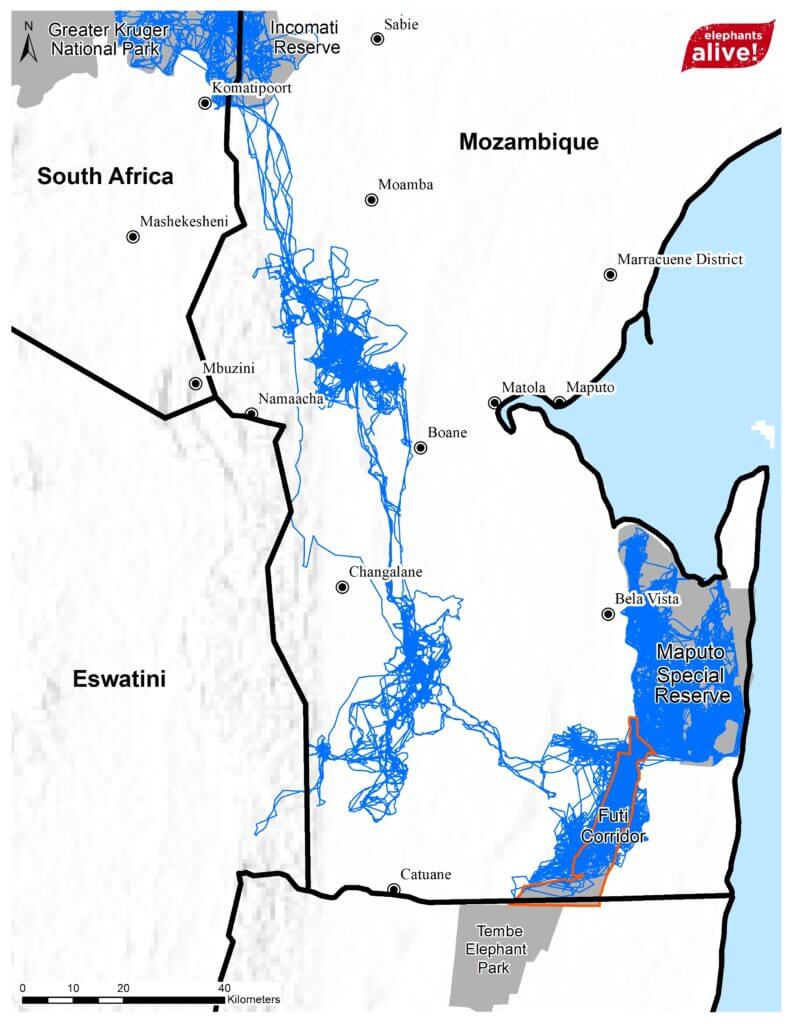 Increasing human populations and different land-use practices, security measures or fences separating international borders has historically led to a variation in elephant densities across Protected Areas (PAs). High local densities of elephants, such as in the KNP and MSR, could not only lower the biodiversity of the ecosystems they occupy, but also lead to less genetic diversity within this segment of the wider elephant population (meta-population). Consequently, enabling natural movements into other areas of the TFCA and beyond becomes critical for the long-term sustainability of PAs with locally increasing elephant populations. Establishing corridors which link PAs across international boundaries and within countries become vital to extensively increase elephant habitat and potentially chanel elephant movements to National Parks that have low elephant densities or are in need of repopulation following the recent declines in areas due to the illigal trade in ivory.

The corridor moving elephants in Mozambique often confront subsistence farmers resulting in crop-raiding events which exaserbate the hardship many of these poverty stricken people deal with due to seasonal droughts and floods. A profound understanding of elephants’ movements and spatial requirements is thus needed, as well as the socio-economic needs of the people that have to share land with elephants. Elephants Alive, with the help of the Elephant Crisis Fund and JAMMA International, have recently deployed a Rapid Resonse Unit (RRU) to assist with the safety of people and their assets by distributing mitigtion toolboxes ahead of time to keep the elephants away from crops. Antonio Alverca who spearheads the RRU together with Antonia Cumbana and Freis Mabuto are the real-time elephant shepherds. This reactive mitigation strategy will be bolstered by a longer term plan to promote human-elephant coexistence in corridors identified by collared elephants and owned by the relevant communities so that people’s livelihoods become compatible with the conservation outcomes planned for corridor areas. The cultivation of elephant unpalatable crops in conflict zones based on the experience gained from the Proof of Concept project conducted in South Africa and in collaboration with the Black Mamba Anti-Poaching Unit will ensure the supplementation of existing incomes by means of crops unattractive to elephants but with a market value. Concurrently, greater food security of crops readily eaten by elephants will be on offer due to their protection via beehive fences and broad barriers of unpalatable crops. We have already gained the support of the Elephant Crisis Fund, the Oak Foundation, JAMMA International and the Kate Sanderson Bequest Fund for the long-term plans in Mozambique while the Tanglewood Foundation, the Lions Share and the Rufford Foundation have financed the demonstration bee- and crop gardens in South Africa.

I watch the collared bull move slowly and deliberately in southern Kruger. There is a mischievous glint in his amber eye, which almost gives away his secrets of great journeys and dangerous adventures. Actively feeding in the open in Kruger does not tell you about his high-speed nocturnal forays in Mozambique to get what he needs after hiding out in thick bush during the day along his journey to the coast. When you next watch a collared elephant, think about the story-boxes they carry around their neck. From their collars, we download the routes to their networks of paths that cover great distances. Often the elephants will line their movement corridors with seeds they ingested in Kruger and which grow into tall trees they may plant like flags mapping their routes of adventure. Their big bodies and institutional memories for far off places are not made for small enclosures or fences. They will push our boundaries. They will keep at it until we pay attention. They will remind us how big our conservation planning should be. They will stretch your imagination. They will keep trying your patience if your thinking is too small. Eventually, you will understand what they are trying to tell you. When you see that vista of a large elephant framed minutely against the background of true wilderness, both you and the elephants will know you have arrived and the journey was worth the strife. Remember to think of these things when next you observe an elephant bull in Kruger with a story-box (collar) attached to it.