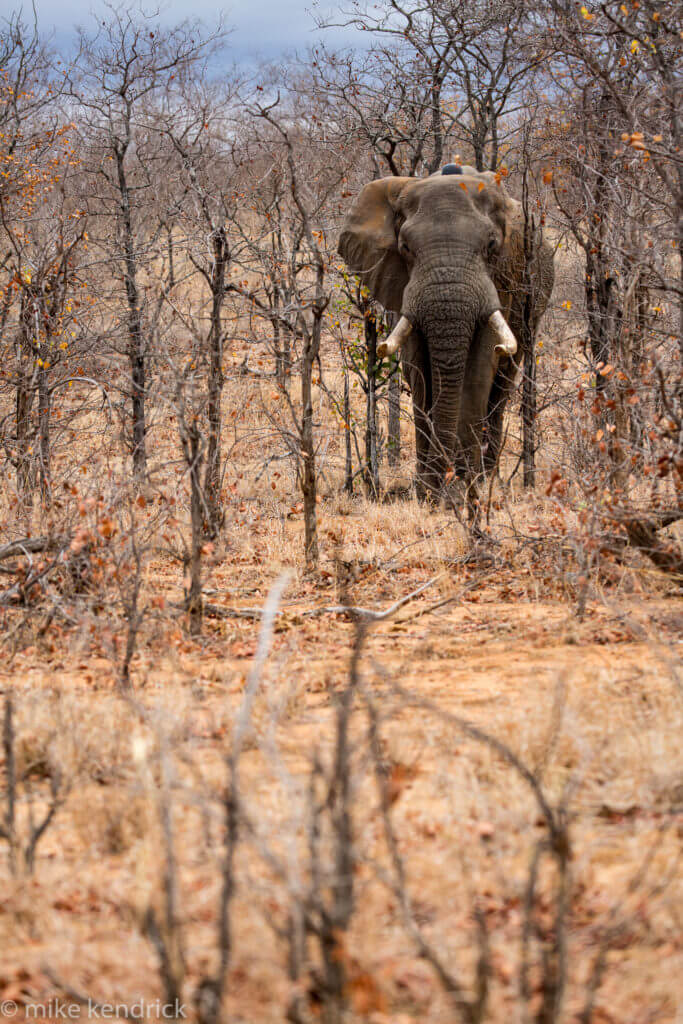 Matambu the gentle giant, is a handsome bull elephant in his prime – but thought to have problems with his sight. Renowned for his calm disposition he is around 40 years old and was first collared by Elephants Alive in 2005. Over the years he has become well known to the Research Team, and is usually found in the Umbabat Private Reserve. When his collar was last replaced four years ago, it was noticed that he was having problems seeing, as he was seen sometimes walking into trees.  In the years that have followed, he has been watched closely and he seems to have adjusted to his failing sight, using his trunk to tap the ground ahead of him like a walking stick.

The batteries on his collar now once again needed replacing, so it was decided to call in veterinary ophthalmologist specialist Dr Izak Venter from Johannesburg to assess him.  Dr Izak briefed the team, to explain how he was going to examine Matambu’s eyes to investigate what the cause of his blindness was and whether it could be treated. 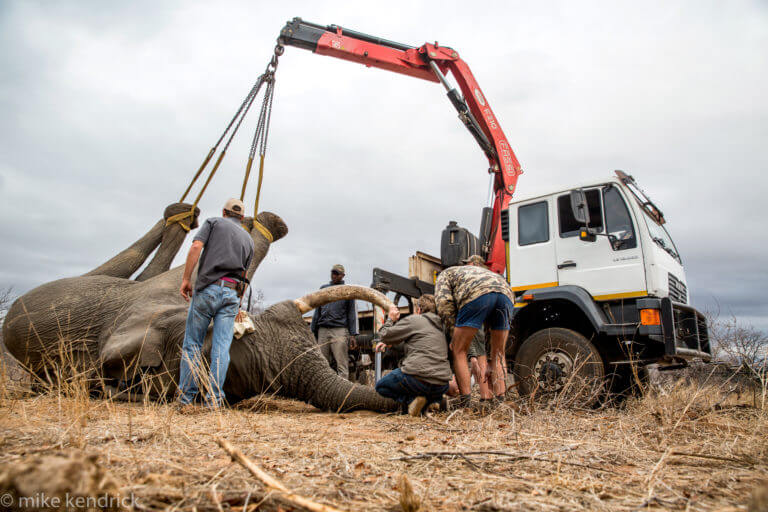 Matambu was tracked on foot, rather than located by helicopter, to avoid making him run too fast while being blind and potentially bumping into objects. He was quietly darted by veterinarian Dr. Ben Muller, and once tranquilised and lying on his side, the Elephants Alive team quickly and efficiently replaced his collar.  Meanwhile veterinarian eye expert Dr Izak examined Matambu’s left eye, shrouding himself under a blanket with his instruments, to avoid the glare of the sun on the elephant’s delicate eye.  A crane was then used to hoist the sleeping Matambu onto his other side, so the right eye could be examined. 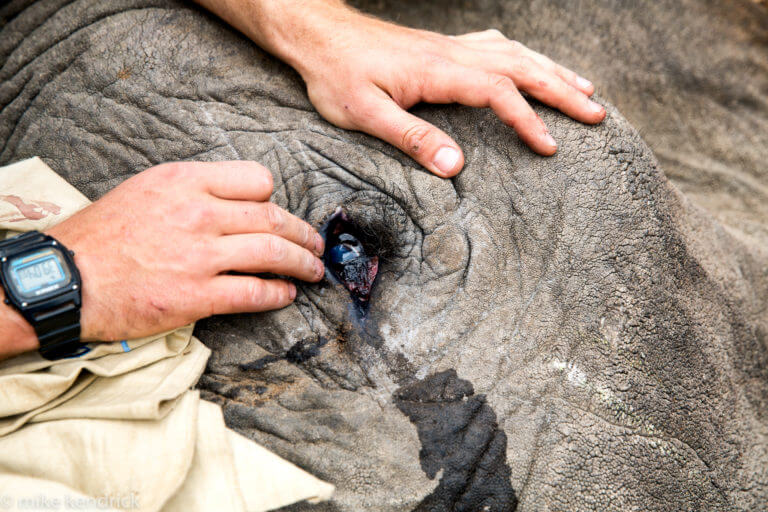 As the Elephants Alive team waited with bated breath, Dr Izak made his assessment.  He announced to the assembled team that Matambu’s right eye was completely blind - caused by retinal trauma in the past, and for which there is no cure. The left eye had a cataract, and Matambu still has partial sight. Neither eye was likely to be causing him any pain or distress, however the cataract would likely cause complete blindness over a period of time. Although cataract operations have successfully been performed on other pachyderms such as rhinoceros the aftercare presents a problem. Matambu cannot be treated with eye drops for weeks afterwards and the operation carries a risk of infection. Undaunted by the results Dr. Izak said he would consult the literature and also find out whether any Zoos throughout the world have conducted successful cataract operations on elephants in the past. 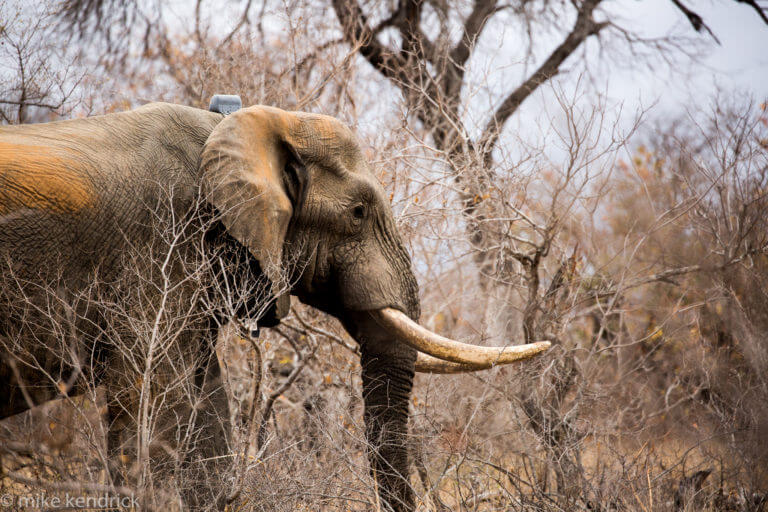 Armed with knowledge, we will be given further advice by the expert but for now no immediate further action could be taken.  Ben the vet gave Matambu the anti-dote to the tranquilizer, and we all watched as he rose to his feet and moved off into the bush. Matambu is in good health, and is obviously finding enough to eat, despite his disability.  Even more remarkable, his tracking data has demonstrated that during musth he still treks long distances to locate breeding herds, before returning to his home range on the Umbabat - showing the power of his spatial memory despite his poor vision. This partially blind bull just continues to amaze us with his adaptability and noble presence.  His disability has graced him with one of the most placid natures you can ever imagine in a bull of his size. As he likes to walk in unobstructed roads, he has developed an exceptional tolerance for the vehicles and people he often intercepts. Long may you wander still albeit in darkness.

Elephants Alive would like to thank Francis Garrard and Carla Geyser for funding the costs of this operation and the fitting of his new collar, vet Dr Ben Muller and ophthalmologist Dr Izak Venter, Johan Myburgh for his truck and crane. The Umbabat chairman Theo van Wyk, is thanked for granting permission to conduct the examination. We are grateful for the continued support and care the Umbabat landowners have bestowed upon Matambu. Riaan de Lange from MPTA is thanked for issues the capture permits. 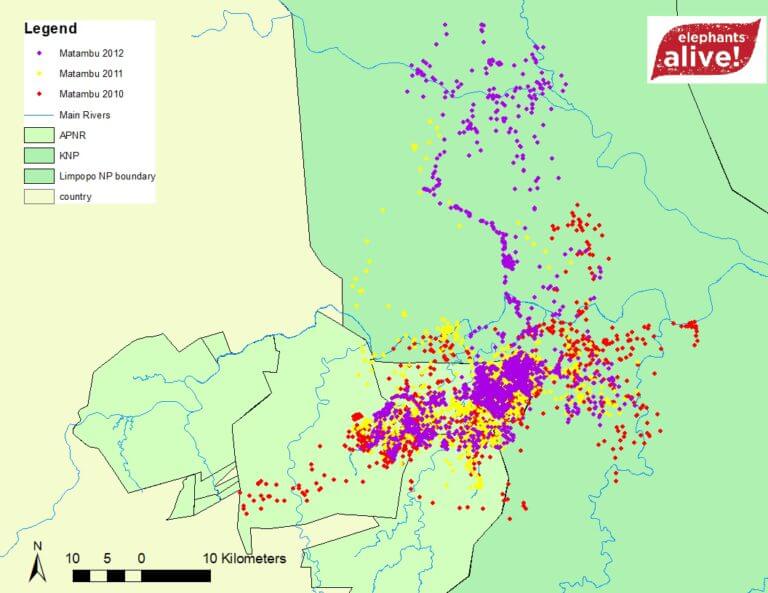 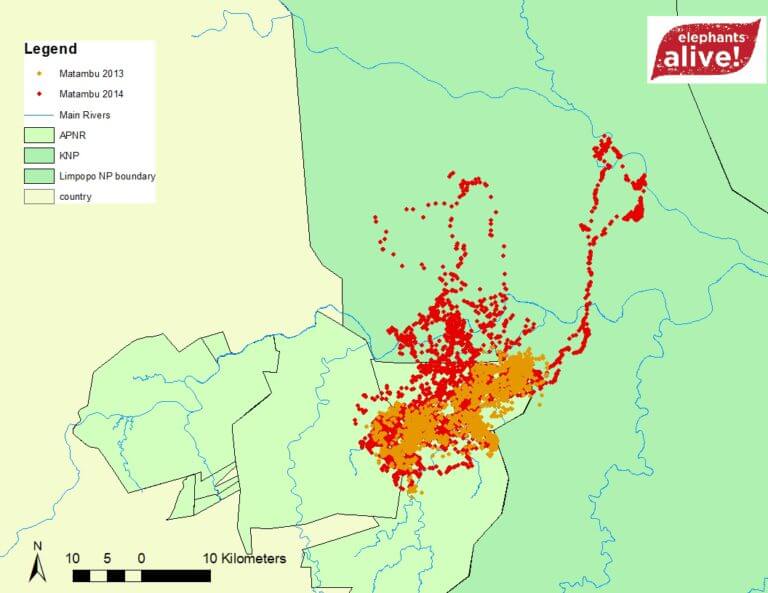 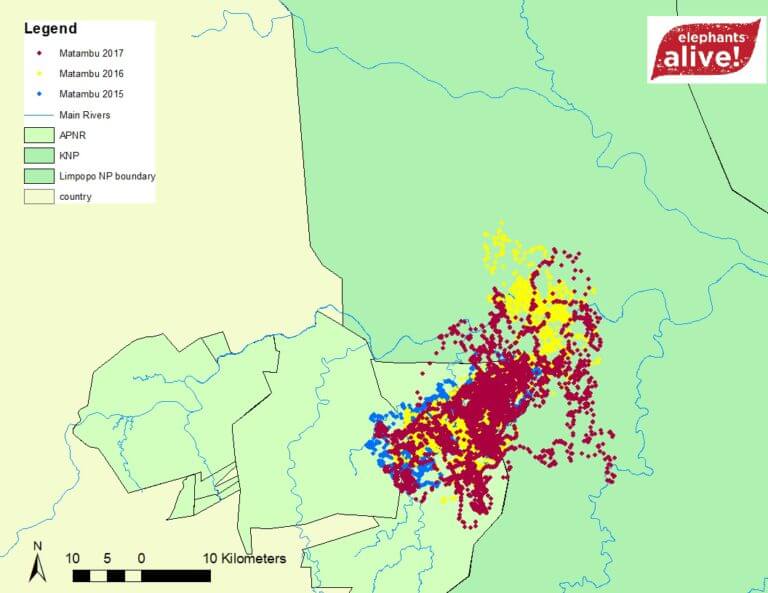 Analysis of Matambu’s movements before his eyesight deterioration and after show that he still uses a similar main home range but that he travels less far than he used too. The location spots being much closer together in the later years indicate that he is slower too. The fact he is still moving around and travelling  outside his home range despite his blindness, shows he is relying on spatial memory. This demonstrates once again how amazing elephant’s spatial memory is, and how much there is still to learn!

Even though Matambu appears to be coping to move around, he seems to have lost his social touch over the years which underlies the importance of social network analysis. This could give us the unique opportunity to determine just how important eye sight is when it comes to elephant interactions and relationships.