Thank you to Dr. Ben Muller and Dr. Joel Alves for darting and taking good care of our study animals. Joel is currently working part time with Ben from Wildlifevets but will be joining this great organisation permanently next year. Thanks to Gerry McDonald and Jana Meyer for the flying. Joel produced the video as a man of many talents.

It had been a long time since I first experienced the life changing privilege of collaring some of our very first large elephant bulls.  Each of the four giants I first met more than 10 years ago after meticulously drawing their ear patterns, in the hope of a re-sighting down the line. 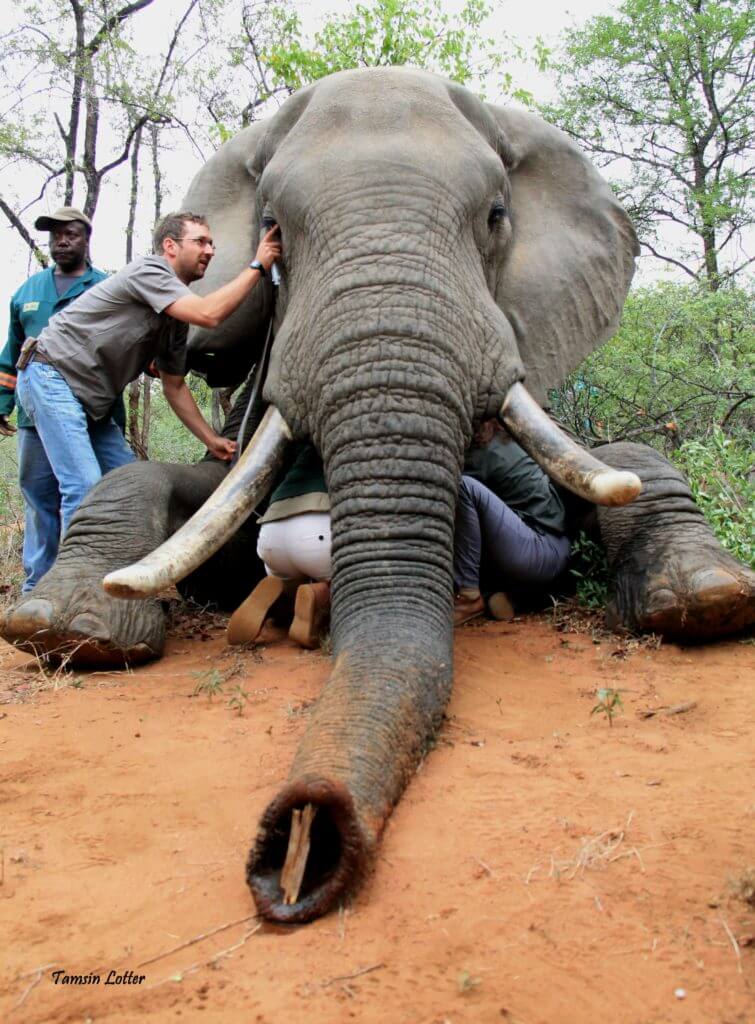 The ID study both then and now involves taking detailed photos for identification of all associating elephants, recording age estimates, social context, GPS location and the reaction of the elephant to the observer. Once the ID drawing has been made the animal is named, so Proud was christened on 22 December 2002, Intwandamela on 23 March 2004, General on 6 May 2005 and WESSA on 20 October 2006. 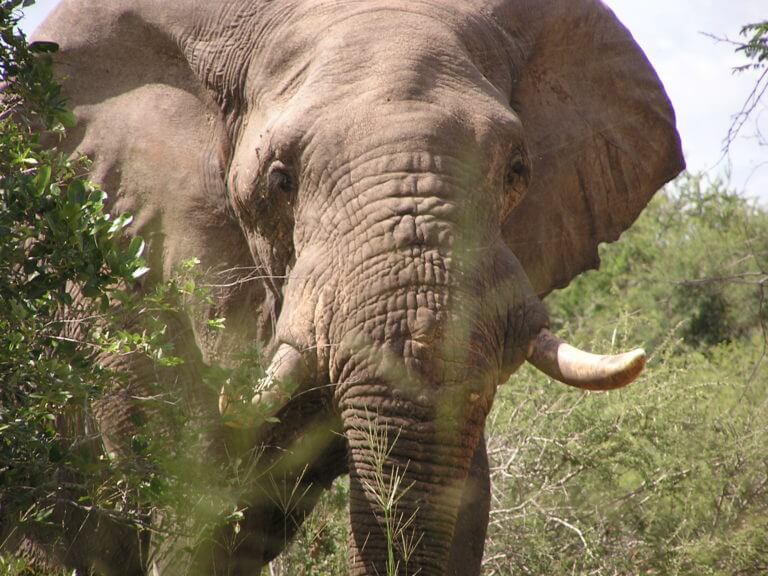 Meeting Intwandamela for the first time was the most indelible experience of the four introductions and certainly earned him his name. We primarily IDed elephants from the research vehicle but on this day I was on foot with Eckson, one of the most experienced trackers imaginable. We were specifically stalking the bull for ID pictures after reports of a very impressive animal had come through via the radio network. I was mesmerised by his beauty as we watched him ambling along. His sweeping tusks were hypnotically swaying from side to side. We thought he was unaware of us but as he rounded a termite mound the wind suddenly shifted. He immediately charged. I stood glued to the ground, knowing not to run at such close quarters while Eckson bravely walked forward, raise his arms and shouted ‘Hey! Hey!’. I will never forget how diminutive Eckson’s outline looked against the back drop of the huge bull’s raised head and piercing amber eyes. Time froze. We held our breath as we stared at each other – us hoping the bull will realise we mean him no harm, the bull wondering if he needs to charge again as the dust of his mock charge slowly settled on our unfamiliar outlines which still remained. He kept his fiery gaze on us but gradually lowered his head, then shook it and slowly turned on his heel. We breathed again. Eckson flashed his white teeth at me in an adrenaline filled smile, then motioned to start the long walk back to camp. We walked in silence and in awe of the experience. Having captured his ID I thought that naming him Intwandamela (he who greets you with fire in his eyes) would be very fitting. 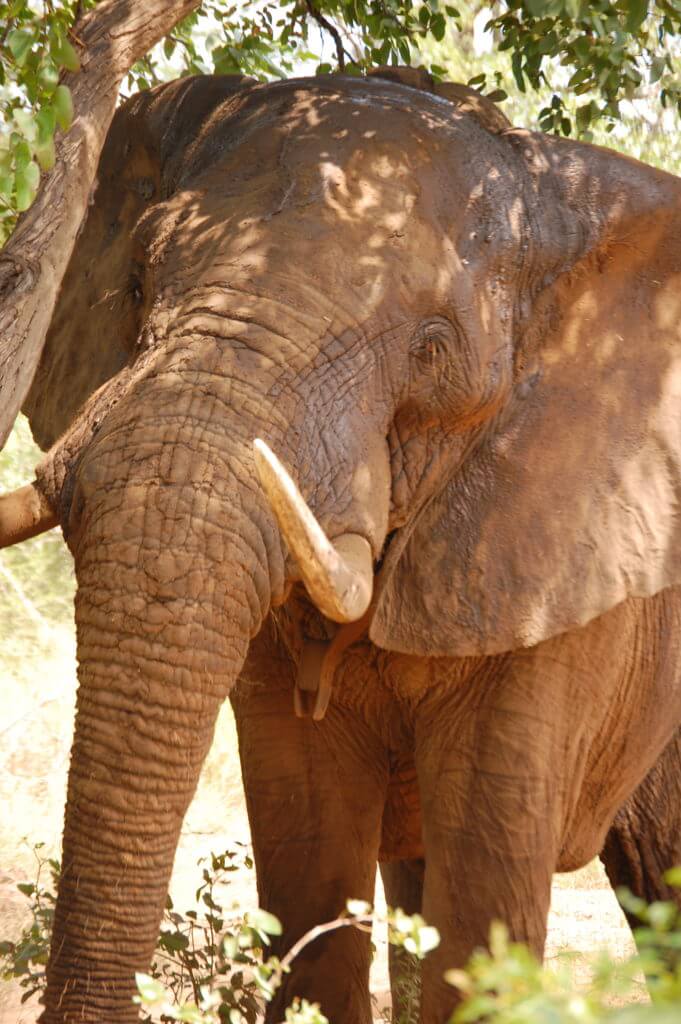 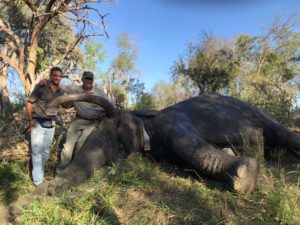 Ben the vet and Dave Powrie with Intwanda

Through the years we have come to know Intwandamela as one of the most placid study animals. He still has a subdued spark in his eye and I like to think that despite the 14 years of following him, it wouldn’t take much to light that fire in his eyes again. Only, I hoped that it wouldn’t happen today as Dr. Ben Muller from Wildlifevets and Dave Powrie, Warden of Sabi Sands, were weaving their way on foot towards him, Ben with his dart gun and Dave as back up. Intwandamela flinched when the dart hit him but only moved a short distance into a dry riverbed. I was thrilled when Ben motioned for me to follow as both him and Dave wanted to keep an eye on the darted bull to make sure he goes down as expected. Intwandamela chose a lovely spot with soft green grass to slowly lie down on while obliviously snoring as the Elephants Alive crew gathered to hastily fit his new collar, take bio-samples and morphometric measurements. 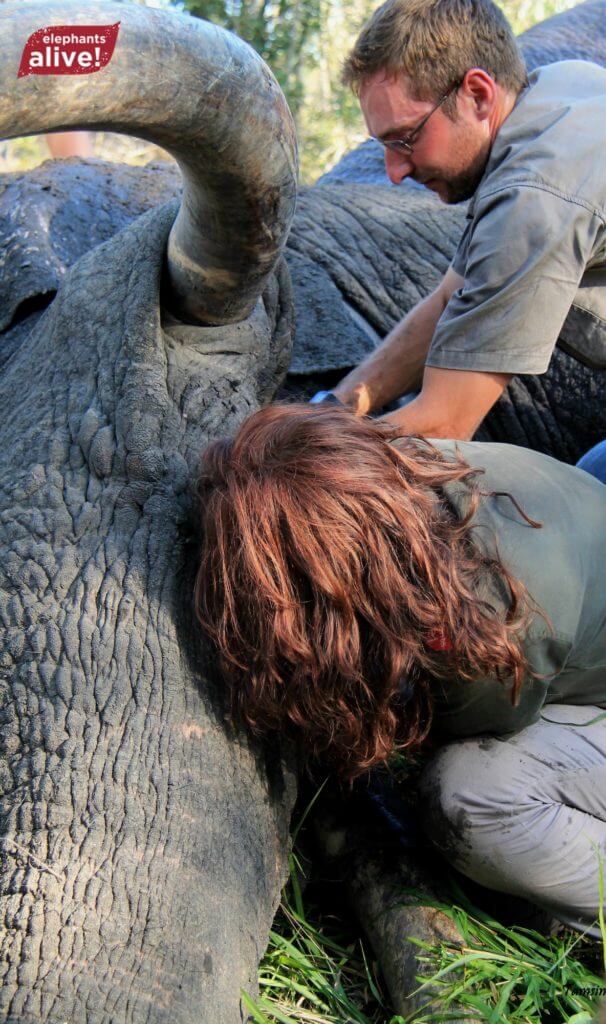 There are no words for the emotions you feel when meeting an old friend like Intwandamela at close quarters again. When you can admire how he has come of age and fully grasped the landscape of skin draped over his whale like body. He was on his last set of molars and they were well in wear. I ran my hands across his silky tusks, momentarily praying that he will never become a victim of human greed. The work was done and again I was privileged to stay at close quarters when Ben delivered the antidote. Ben, Dave and I watched him recover and slowly amble off like he had done so many years before.....his eyes containing a fire now left smouldering through many years of habituation, my eyes hot with tears of gratitude.

Thank you to Mark Bourn and Dave Powrie for all the logistical back up. Thank you to Johan Eksteen and Riaan de Lange for the help with the permits. Dr. Ben Muller from Wildlifevets, thank you for making this particular collaring experience so memorable. Dr. Joel Alves is thanked for also offering extra veterinary assistance. Jana Meyer, thank you for being backup pilot. The Elephants Alive team, proud to work with you all and very appreciative of all the help. 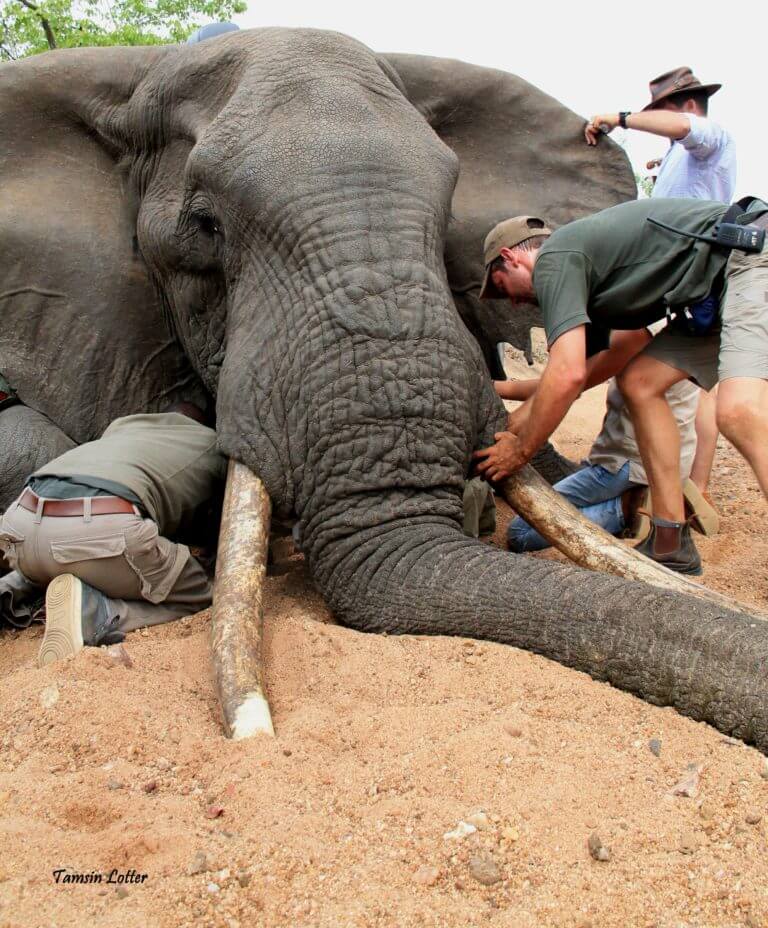