Elephants Alive’s research has successfully demonstrated that elephants avoid trees that have a bee hive hung in them. But what is it about the bees that is causing the elephants to steer clear? Our studies continue with the next phase of bee research……

Over the past decade, extensive research has been carried out on a worldwide scale to investigate the usage of honeybees as a mitigation method for human-elephant conflict. Whilst elephants may be thick-skinned and the largest land-dwelling mammals, sensitive areas around their eyes and ears leave them vulnerable to the painful stings of the relatively tiny honeybees. As bizarre as this may sound, it is backed by thorough scientific studies focussing on various aspects of the elephant-honeybee relationship!

Pioneering research by Dr. Lucy King (Save the Elephants - Elephants and Bees Project) has shown that elephants display signs of uncertainty and fear when confronted with the sound of swarming honeybees, often moving away from these sounds at quite some pace. Furthermore, King and her colleagues have successfully used beehive fence-lines (beehives connected to one other by wires) around crop fields as a method of preventing elephants from crop raiding. Beehive fence-lines are now being used in various African and Asian countries where human-elephant conflict is of great concern. More recently in South Africa, research by Elephants Alive has found that beehives can be used as a successful mitigation method for protecting large trees from elephant impact in the Greater Kruger National Park.

Whilst studies have focused on elephant interactions with honeybee sounds and actual beehives, only suggestions and hypotheses have been made about the impact that the honeybee alarm pheromone may have on elephants. And it is worth investigating because of the elephants’ acute sense of smell! The honeybee alarm pheromone is comprised of a number compounds, and is produced by honeybees when threatened. Production of this pheromone by honeybee guards increases the aggression levels of the rest of the colony, leading to the honeybee attack response. 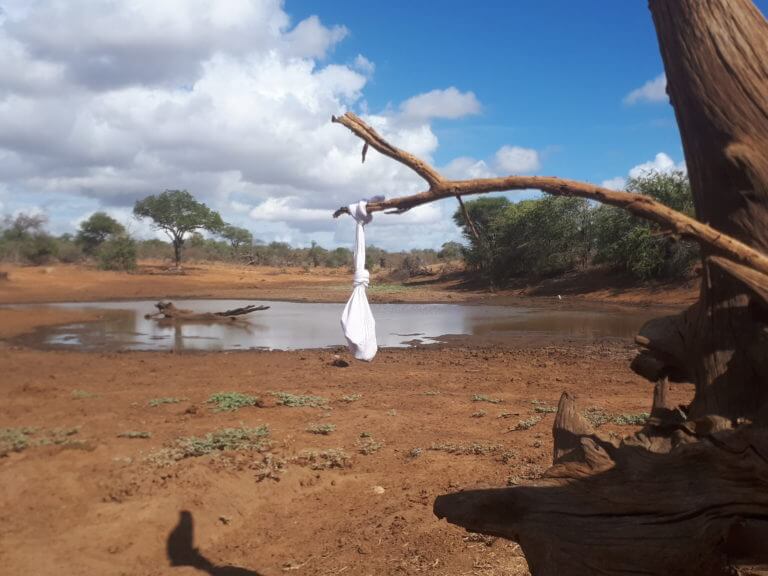 Whilst the manipulation of this pheromone by scientists can evoke attack responses from honeybees, it is unknown whether the pheromone can be used to deter elephants. Elephants Alive researchers have partnered with Professor Mark Wright (University of Hawaii at Manoa) and Transfrontier Africa to investigate the honeybee alarm pheromone’s potential in South Africa on both wild and semi-captive elephants. In Balule Private Nature Reserve, the researchers investigated whether socks containing the alarm pheromone SPLAT (Specialized Pheromone and Lure Application Technology) mixture could effectively deter elephants around waterholes. Elephant reactions to these socks were compared with reactions to control (unscented) socks. The results have been very positive and will soon be available in a scientifically published research article. The researchers, in collaboration with Human-Wildlife Solutions, will now turn their attention to semi-captive elephants at Camp Jabulani (Kapama Private Game Reserve) for in-depth investigations into elephants’ behavioural responses to the pheromone, as well as honeybee sounds, smells, and presence. The results from this experiment will help researchers use various aspects of honeybee biology in the search for peaceful solutions to human-elephant conflict. The research team are looking forward to commencing with the trials and thank Adine Roode and her staff at Camp Jabulani for their willingness to assist with this ground-breaking research.