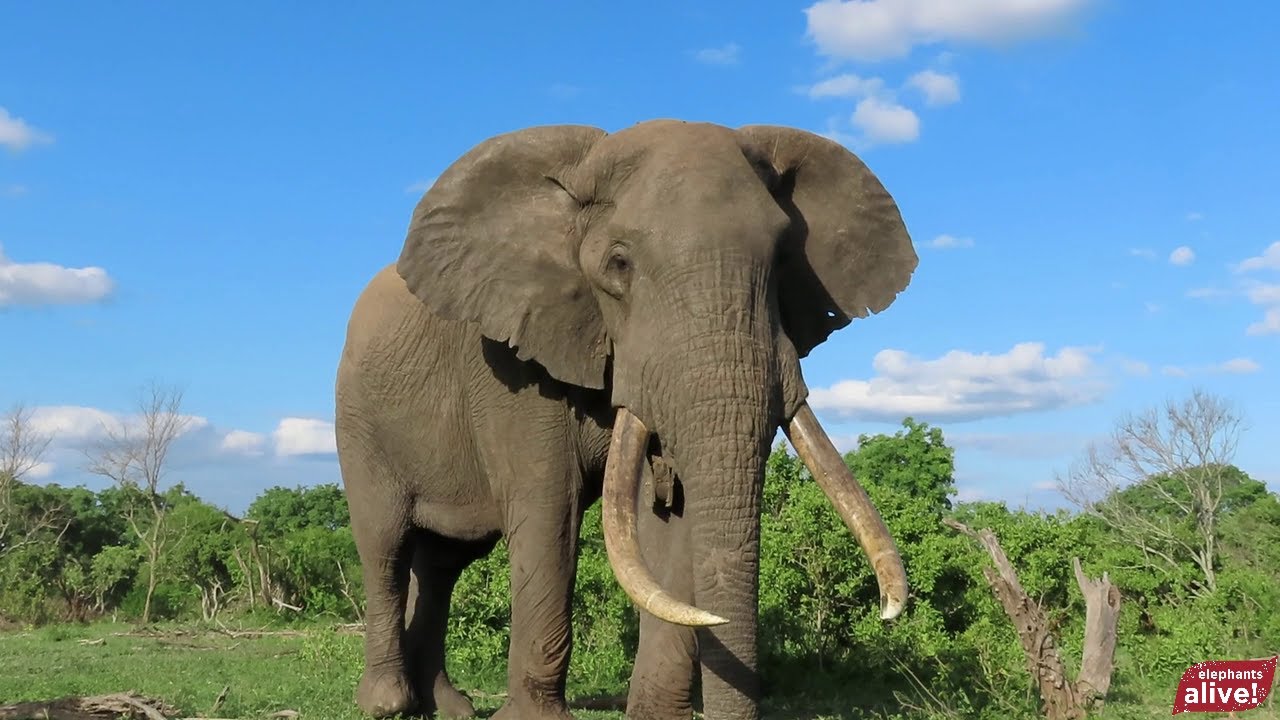 A physician once said: “The best medicine for humans is love.’’ Someone asked, “What if it doesn’t work?’’ He smiled and said: ‘’Increase the dose.”

We walked silently in single file, not like stalking predators but with purpose. Why? We came to meet a Gardening Giant, a Gentle Giant, a Gracious Giant, reminding us why it is important to protect elephants. Who is this Giant? Fifteen years ago I had traced the ear outlihene and registered him as Kilimanjaro (the Kruger recently named him Mondzweni). Yes, like Kilimanjaro the mountain who doesn’t seek forgiveness for the space it takes, so it is with this large tusked elephant bull. He was young then but already carrying a mountain (Kilima) of whiteness (Njaro) and I knew that one day his ivory would bestow upon him a sense of greatness. Time ticked by slowly while his tusks grew and I waited to meet him again.

Up close with an elephant

We moved in an arch ahead of the elephant until we reached a wide open patch where we went to sit side by side surrounded by a grove of marula trees in which Kilimanjaro was feeding at a distance. He was slowly moving out of the fringes of tree shadows towards us whilst sniffing out devil’s thorns creeping along the dark soil. A gentle breeze took our scent towards him. Momentarily his trunk snorkelled to catch our odour. He now knew humans were there. However, we were different. Our motivation was love and respect; not poaching. No gun, no fidgeting legs to take flight, no tangible fear. Did he sense this? We were seated, rooted, grounded and trusting of this bull we had come to know.

He fed closer and closer in a deliberate straight line towards us. At about 10 metres from us he lifted his gigantic head to cast his amber eyes more clearly upon us. The blazing blue sky behind him was larger than the frame of this elephant but somehow what he presented made the sky fade insignificantly behind him. He stopped feeding as he needed to satisfy his curiosity. He edged closer towards where I was sitting. He stretched his muscled trunk before him as if reaching for my shoe and then stroked his trunk across his head as if to remind himself that it was him being this brave. After all, the three humans at his feet had taught his kind that we are the super predators.

A meeting of kindred spirits

Time stood still. We shared a feeling of ‘’I am because of what we all are.” Ubuntu is the word, the African philosophy, the personification of this connection and the power of this shared vulnerability. Kilimanjaro moved sideways along the three of us to respectfully circle around us, silently returning to feed along his initial trajectory before making a detour to inspect us. He chose to come towards us, he chose not to stick to the shadows and avoid us.  He chose not to dominate us even though he had every right not to fear us because of his size. If he did not make a detour to see us, we would have meant nothing to him. He was none of these and neither were we. We set up a meeting and both parties showed up to acknowledge each other’s presence. There was freedom of choice and the utmost reverence for the enormity of the moment to narrow the gap, to bridge it and to increase the dose…

We sat still after he had left although our minds were reeling. I replayed his tangible presence in my mind’s eye. He had literally blocked out the sky as if he were my world, my peace with life. In an instant, he gave more meaning to 25 years of studying elephants than any scientific publication or discovery ever could. Kilimanjaro had created a realm, which moved beyond science and bordered on the spiritual. He held my sense of purpose beneath his feathery eyelashes upon that amber-filled gaze. His tusks were not weapons but timelines of tragedy.

They represented a poverty of spirit that we as people have manifested in our actions. A poor reflection of how we value the world and material things like ivory. A measure of how we place value on objects rather than wisdom, on greed rather than respect and on power rather than compassion.

An experience of mutual love and respect

I once asked a seasoned tracker what was respect. His answer was embedded in a story. He was hot on the heels of a rhinoceros he was tracking along a clear footpath. It was summer and the sandy path was fringed by lush grass.

As a tracker, the going was easy because the grass would reveal if his quarry had left the footpath. He noticed from the art of tracking for many years that the rhino had done just that. There was a clear half-moon of flattened grass to the right of the footpath before it returned to the sandy track. Intuitively the tracker decided to do the same, hoping to feel his way through the rhino’s reasoning. When he returned to the footpath he looked back to see a spider’s web backlit at the very height of where the rhinos head would have been. It was fully intact and to the tracker, this represented respect.

Kilimanjaro detoured out of respect, an acknowledgement that “I have the strength to do you harm but I chose not to”. Neither party had to prove their strength to one another.

You never need to do so if you already know who you are and if you are permitted to authentically be yourself. If who you are is grounded in love and a longing for peace, Ubuntu will prevail. You can coexist in a peacefully powerful way that cannot be described in words.

We sat for a long time after we no longer heard Kilimanjaro feed behind us. We recalled the experience to each other as if hearing it from three different angles would bring it back to life again. The sun began its descent past the outline of the marula grove. A lion started to call in the distance to send a final blessing from Africa. We smiled at each other with full hearts and soaring spirits. It was time to go. We walked the distance back to the vehicle as if hovering in thin air, deep in thought about the life changing experience we had all enjoyed.

Thank you Kilimanjaro for allowing us to track you so that we could collar you to protect you from those who want to reduce you to only the value of your ivory. Thank you for graciously increasing my dose of love and appreciation for what you represent. Thank you Alan McSmith for not only creating but for sharing a sacred moment. Robin Cook, I am glad that this birthday gift will forever be in your memory bank.

Please note: this represents a unique and special occasion not to be taken as the norm. We knew the nature of this elephant and had an extremely experienced trails guide in Alan McSmith to accompany us. Collectively we had more than 50 years of working with elephants between us.